Here’s why Roblox was Unbanned in the UAE 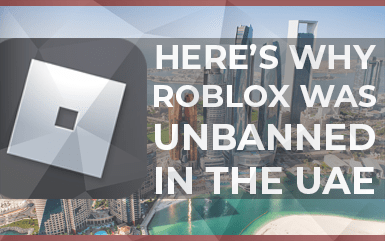 Here’s why Roblox was Unbanned in the UAE

Many questions and theories have been circling around on why Roblox was banned in the UAE (United Arab Emirates) in the year of 2018. Fortunately to many players from the UAE, Roblox was officially unbanned as of 2021. In this post we will be covering the information on this matter.

To briefly describe Roblox, Roblox is an online game that was released in September of 2006.

Ever since the release of the game, Roblox has had a steady growing player base. As of now, Roblox has millions of active users.

Many believe that Roblox is popular (especially amongst the youth) because of its various compelling attributes. Roblox has millions of games to select from so that players never get bored. There are so many unique selections of games that kids seem to be particularly drawn to for the most part.

To add onto the previous information, Roblox as well has an Avatar Shop with many ways for players to creatively put together their own outfit. There are many interactive components to Roblox.

Why was Roblox Banned in the UAE?

Roblox was officially banned when Dr Hamad Saif Al Shamsi of the UAE, UAE Attorney-General, had annouced in early 2018 that they would be banning a wide variety of online games, one of them being Roblox.

This decision was made after concluding that some online games can deteriorate a child’s mental health. As a result of the mental health concern, this precaution resulted in the country’s ban of Roblox and several other online games.

Why was Roblox Unbanned in the UAE shortly after?

Because of Roblox being one of the most popular online games, several fans of Roblox located in the UAE were extremely displeased with the decision that caused Roblox to be banned.

Many debates were risen about Roblox’s impact amongst the players.

These are reasons that many believe may have heavily persuaded the decision of unbanning Roblox in the UAE as of 2021:

Judgments on the Unban

Generally, the Roblox community has been esctatic on the Unban of Roblox in the UAE. Here are some reactions from Twitter: